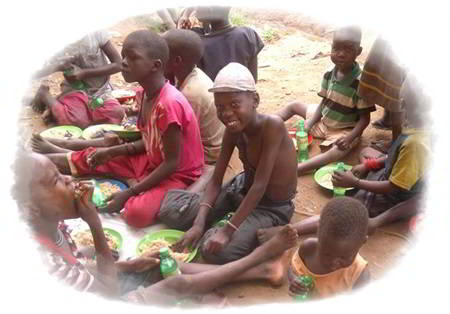 Dear friends and partners, I want to tell you about the big project we did the 24 of December 2014. My team and I went to the Katwe slum, near the clock tower in the center of the city of Kampala . We met all the street children there to share and preach the gospel to them. We told them why Jesus Christ was born, and why he loves us and died for us.

We  started the meeting with an opening prayer, we sang some worship songs, and preached the word of God to the street children. Then Evangelist Kukulu Richard led us in worship and praise and he gave out his testimony how Jesus met him, and how his life was before. He told them how he used to sleep on the street, how he always was hungry and how hard the life was on the street. But all changed when he accepted Jesus Christ into his heart, and he encouraged them to do the same. Five street children came forward and said we are so tired of this street life, we want to come back to God, we prayed for them and blessed them

Many were touched
when Evangelist Muiika Emmanuel Fred preached about the love of God to them. Many people responded to the sermon that God had given Muliika to share . Over tree hundred and sixty street children accepted Jesus Christ as their savior. Many children were healed and some were set free from demons who tormented them. The power of God was so strong at that place, One man had accepted Jesus and were dancing he fell down, and the demons ran away from him, and he was set free from drog abuse. We thank the Lord and give Him all the glory and praise 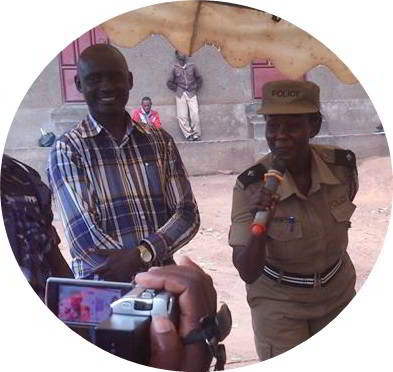 The Police Commander of the Kampala Katwe area, she also spoke to the street children. She was so happy because Evangelist Muliika, Jesus friend’s team, and all other delegates from the government came to meet these children. She is a Christian and she told them, Jesus is the way, the truth, and life and she told all street children to come to God their creator for that is where their help comes from. She gave us three police officers to keep order, and some other private soldiers to prevent crimes to happen.

We got seven delegates from the government to join us, and one of the delegates gave a speech and he said; “Our country we believe in God and our moto is “FOR GOD AND MY COUNTRY” They requested all the street children to go to the nearby churches, to learn about Gods word so they can have a better life and things can change.

A well-known television journalist
from Bukedde-TV, she recorded the entire event with her video camera, and took the recordings and showed it on the news later that evening. The whole Uganda could see what Muliika and his team and Jesus friend’s team and other missionaries did, led by God. We are so thankful to the Lord for His grace to do this work.

Many called me praising God and Jesus around the country, but l told them to do the same where they are as they reach out to the poor and those in need plus winning more souls to the kingdom of God.

Muliika prayed
That God would bless the food and God answered him. It was more than enough food for all to eat well. This was a miracle. We gave out food to all the street children and the people. We had planned to feed maximally 600 street children, but amazingly, we fed 1100 children and adults, and still it was some food remaining in the pans. Some of my mission team members took home some food to give to their families. All ate and drank sodas and water and all plates were full of food. We all thanked the Lord for this miracle.

Giving out clothes
after giving out the food, we also gave out some few shoes and clothes, we had some shoes and clothes to the children and adults, and then Evangelist Muliika closed the meeting with a closing prayer.

Things we hired
We hired tents, 20 chairs for we had not enough money, we hired some sound equipment and some sitting mats. We spoke to some street children, they requested us, the Jesus friends team, Ugandan pastors, churches around the world plus those with a heart of mercy and love to come and help them out of this bad situation they are in.

The need is great
Many lack clothes, shoes, food, clean water, shelter, education and work to do. They asked me to help them so they can have a better future. If you are able to help us with anything to give them. Please contact us.

We give God all the glory for this project
We thank God for His Grace to do this work. I want to thank all of you supporting this project, my team members, may God bless you so much.

If you want to join us in this great work, please contact us!